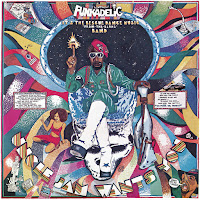 The artist behind the art.

Many people have never heard of Pedro Bell (including me before this post) but his work was easily recognizable and iconic. This is the artist whose elaborate designs and art graced the covers of numerous Parliament Funkadelic, and George Clinton solo albums starting with the band's 1973 album, 'Cosmic Slop' and continuing for over 10 years. Bell's covers were immensely popular and were synonymous with the Funkadelic brand. Bell's style was a mix of Afro-futurism, graphic novel, collages, and sex.
As young artist, after hearing Funkadelic on an underground Chicago radio station Bell began writing illustrated letters, drawings and college-newspaper writing samples including his "psychedelic envelopes" to the band and 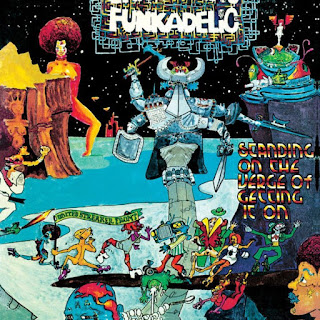 their manager. They liked his style and he was hired to produce artwork for the band beginning with show posters, promotional items, and press kits, moving on to album artwork which included slang, nicknames, and otherworldly concepts that became integral to the Funkadelic identity. Bell  was strongly influenced by the Afrofuturist movement, and strove to reflect the band's atmosphere, music, and stage performances in his work. He stated he most times would only have the record title, not hearing the music before creating the album artwork.
Bell went on to create several of Funkadelic's best known album covers, including 'Standing on the Verge of Getting it On' (1974), 'Let's Take it to the Stage' (1975), and 'One Nation Under a Groove' (1978). He also created numerous George Clinton's solo covers, 'Computer Games' (1982) among others. Bell's work has been exhibited in museums and galleries globally. 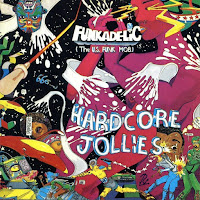 Bell also went under the pseudonym, Sir Lleb (his surname spelled backwards) and is credited with many of the liner notes on Funkadelic's records and contributed to the band's language, words and phrases like 'Funkapus', 'Bop Gun', 'Thumpasaurus', 'Queen Freakalene', and 'Zone of Zero Funkativity' to name a few.
He donated artwork to the Black Panther Party and was expelled from school for participating in a protest.
Bell, a Chicago native was profiled by the local newspaper in 2009, the piece depicting him attempting to sell the originals of the iconic work while living in poverty and struggling with poor health.
Bell, died last month, August 27, 2019 at the age of 69.
Follow my blog with Bloglovin
Art Artist Artists Collages Collectibles Graffiti