There's a path for you and I to follow, for our goals aren't always in our sight - lyrics, Movement In The Light (Fishbone, American band) 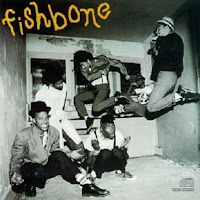 This past weekend I went to the The Bomb Factory to what I thought was a Fishbone concert, one of my favorite bands to see live. Fishbone is a ska-punk-soul-rock band that I've been a fan of since the '80s. I still have several well worn CD's I eventually ripped to my computer to play incessantly and was thrilled to find them on Pandora. Like I said, I'm a fan.
The band has been described by AllMusic as "one of the most distinctive and eclectic alternative rock bands of the late '80s with their hyperactive, self-conscious diversity, goofy sense of humor,

and sharp social commentary, the group gained a sizable cult following yet were never able to earn a mainstream audience." If that's true, a lot of people don't know what they're missing. Sadly, the chant: "Fishbone is really hot" would also be lost on them. They're still very entertaining high energy performers that compel you to jump around, sing along, and celebrating all that is Fishbone.
It turns out it was the George Clinton Parliament Funkadelic headlining, touted as his final tour preceded by Galactic, Fishbone, Dumpstaphunk, and Miss Velvet & The Blue Wolf opening.
We arrived early enough to see all of the opening acts with our tickets SRO. Somewhere in my 57 year old mind it didn't register that meant we'd be standing for over six hours. I thought enough to wear sneakers as most of the over 40ish crowd did. Grown people will usually choose comfort over cute. The first band was time for drinks, finding our friends, and commentary about how the keyboardist reminded us of Lisa and Wendy from Prince’s Revolution. We got a little mixed up about the next band, Dumpstaphunk, but the music was fun. By the time Fishbone was on we’d shimmied our way close to the stage and made the best of IMO a brief performance, dancing, and singing at the top of our lungs. I don’t have much recollection about the band between them and Clinton, we were having an impromptu robot dance off at the ladies room (did I mention the Irish Mules were tasty?) but made a note to check them out later. 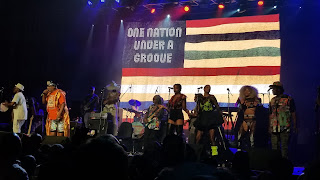 Parliament’s band members were maybe the 3rd or 4th generation throughout the cycles of band members over the years, Clinton most likely the only original member. It was entertaining, songs that brought back memories of house parties, and us, barely old enough to get into nightclubs. I found myself jealous of the several seats George Clinton kept having. More power to him to be still performing at 78. As our backs, legs and feet started to ache from all the standing and dancing we never do on a regular bases we finally had to call it a night and left, the band still going full tilt, about 1am.

The documentary, 'Everyday Sunshine: The Story of Fishbone' (2011) a fun, interesting, entertaining, and somewhat sad account of how the band came to be. If you're a real fan, you will enjoy a behind the curtain account of the band and if you're not, you might become one.
On IMDB Pale Griot film describes the film of how Fishbone rose from the shifting fault lines of Hollywood fantasies and the economic and racial tensions of Regan's America, and became one of the most original bands of that time. With a blistering combination of punk and funk they demolished the walls of genre and challenged the racial stereotypes and the political order of the music industry and the nation. 'Everyday Sunshine' is about music, history, fear, courage, and funking on the one. You should definitely take 2 hours out of your life to check it out.
Follow my blog with Bloglovin