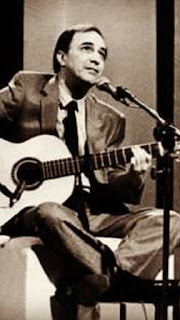 João Gilberto was the father of Bossa Nova

Given his first guitar at age 14, Brazilian, João Gilberto formed his own band, 'Enamorados do Ritmo' (In Love with Rhythm). He developed a unique music style blending Samba with contemporary jazz coined 'Bossa Nova'. Gilberto didn't have a big voice, and sang quietly, whisper-like, accompanied by virtuoso guitar. This style allegedly caused him to be briefly committed to a mental institution by his father who called it bizarre at his son's refusal to sing "normal". His music symbolized hope and optimism for Brazilians: an urban, industrialized country that was building new capital and dreamed of better times.

In 1964 he won a Grammy for Album of the Year which included songs, 'Quiet Nights, and his best known break-out hit, 'The Girl from Ipanema' now a jazz standard and over time has been covered by artists like Frank Sinatra, Ella Fitzgerald, and the Supremes, to name a few. Gilberto would go on to record with some of the greatest jazz musicians of all time, including Herbie Hancock, and Stan Getz. His music is considered revolutionary by many.
The album's worldwide success brought him to the U.S. and Mexico where he lived and released albums including João Gilberto in Mexico (1970), João Gilberto (1973), and Amoroso (1977) before moving back to Brazil in 1980.
Gilberto released numerous live albums in the '80s and '90s,
Following his worldwide acclaim, he eventually chose a life of seclusion. He recorded his last album in 1989 and nearly two decades later, in 2008, performed his last concert.


Gilberto passed away July 6, 2019 at the age of 88.
Follow my blog with Bloglovin
Artist Artists Audio Composers Culture Music Musicians