I paint and sculpt to get a grip on reality... to protect myself - Alberto Giacometti (Swiss sculptor, painter, draftsman and printmaker) 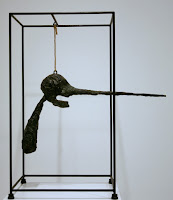 Alberto Giacometti was one of the most important sculptors of the 20th century.

Best known for his sculptures of solitary figures, Giacometti's work was influenced by Cubist and Surrealist artistic movements. A Swiss born artist who was involved in several movements including expressionism, existentialism, he attempted to show the deeper reality of a subject, to see beyond its natural appearance. His sculptures have a totem or iconic character, and appear frail, elongated, and roughly textured. His works

show the loneliness and delicateness of the human soul.
Giacometti wrote texts, periodicals, and exhibition catalogues recording his thoughts in notebooks and diaries. His self-critical nature led to doubts about his work and ability to do justice to his own artistic ideas but acted as a great motivating force. Between 1935 and 1940 he concentrated on sculpting the human head, focusing on the sitter's gaze.
After he met his wife Annette in 1949, his sculpture scale grew larger as well as thinner. His paintings underwent a similar transformation, appearing isolated, delicate, finer, as the result of continuous reworking.
Giacometti was heavily influenced by the stylized, fixed attributes of Egyptian art. The striding figures, and steady gazes of the period had a lasting impact on his work. Viewed up close the impression becomes distorted by the relative scale and coarse texture, questioning the human condition, as well as existential and intentional debate played a significant role in his work. 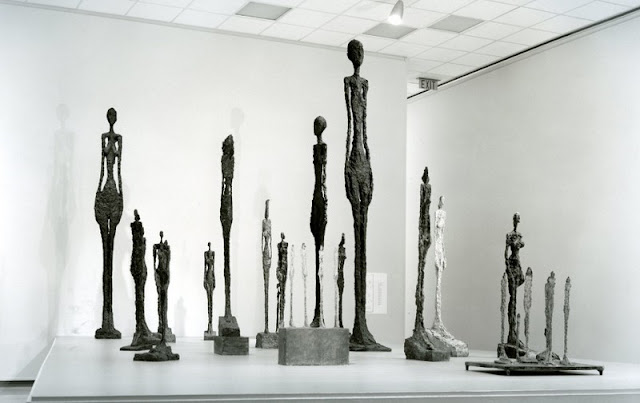 Giacometti was obsessed with creating his sculptures exactly as he envisioned. Through his unique view of reality, he often carved until they were at thin as nails and reduced to the size of a deck of cards. A friend once commented that if Giacometti decided to sculpt you, he would make your head look like the blade of a knife.

In his whole body of work, Giacometti's painting constitutes only a small part. However, after 1957, his figurative paintings were equally as present as his sculptures. His practically monochromatic paintings of his late work are separate from any other styles of modernity.
Follow my blog with Bloglovin
Art Artist Artists Painters Painting Sculptors Sculpture