The only thing that interests me is history, reviewing the past and making something out of it. - Leon Redbone (Cyprus-born Canadian-American singer-songwriter, guitarist, and actor)

Leon Redbone's musical style was one of a kind

Easily recognizable both visually and musically with his gravely baritone voice, his signature Panama hat, dark sunglasses, and Groucho Marx style mustache. Leon Redbone's music was a fusion of jazz, ragtime, and  blues tagged neo-vaudeville. With his Tin Pan Alley (1890 - 1910) songs he rose to fame in the 1970's, and recorded over 15 albums. 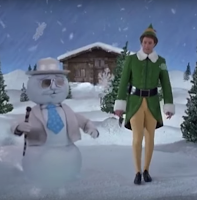 His most recent claim to fame was "Leon the Snowman" in the Christmas movie, 'Elf', one of my favorite holiday films.
Redbone was always elusive about his background, often giving wrong names, birth place and dates. He played the guitar, harp, fiddle, and mandolin preferring songs of a forgotten era, those of Ethel Waters, Blind Blake, Jelly Roll Morton, etc., and appeared regularly on 'The Tonight Show Starring Johnny Carson', and 'Saturday Night Live' the first season.

He was self taught, played by ear, never had band rehearsals and wouldn't follow set lists. He was described as both musical artist and performance artist, literally played to his own beat, the result an enviable career that spanned over 40 years.
At the core of his initial calling was the desire to simply honor songs from the past - a waltz with bygone days that established him as sole curator of the museum of 20th century music, the bard has continued his love affair with tunes from the turn-of-the-century flapper-era radio ditties, Depression-spawned ragtime and World War II folk-jazz - Leon Redbone biography (edited)

His commercial success included this Budweiser spot from 1982
Redbone died last week, May 30, 2019 at the age of, well, who really knows?