I don’t listen to what art critics say. I don’t know anybody who needs a critic to find out what art is - Jean-Michel Basquiat (American Artist) 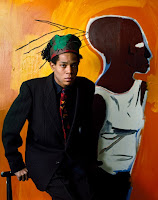 Jean-Michel Basquiat's short life made a life long impact on the art world.

I've posted about Jean-Michel Basquiat aka SAMO twice previously, once about street artists and mentioning his collaboration with Francesco Clemente. His primitive style using symbols and designs took the art world by storm in the late 1970's. He was self taught, had no formal training creating highly impressionistic work that mixed graffiti, and signs with the gestural and intuitive approach of abstract expressionist painting converging African, and Aztec cultural histories with Classical themes and contemporary heroes, like athletes and musicians. 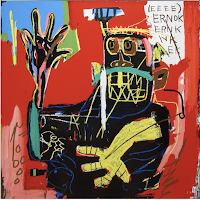 He drew inspiration from his Caribbean heritage, his Haitian father and Puerto Rican mother. Basquiat said he didn't think about art while he works, he thought about life.
He left home at 17 and lived on the streets and began his life as an artist, spray-painting on walls in and around SoHo under the pseudonym SAMO, for "same old shit", a collaboration with his friends and fellow graffiti artists Al Diaz and Shannon Dawson. At 18 he transitioned from street to gallery art, writing and drawing on any surface. His terrain included the walls and floor of the apartment he occasionally shared with another friend, Alexis Adler.
He drew on trash found in the neighborhood, discarded scraps of canvas, old appliances, illustrating them with images of his surroundings: car accidents, ambulances, etc. 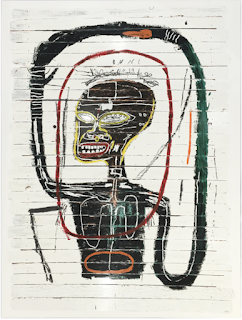 The work was raw, coarse, but also sweet, containing hints of the emerging style. He began to cross out words to draw attention to them. He emerged in the New York art scene at 20, when the Expressionist movement was at its height, and had his first exhibition in 1980. From there his career catapulted, even appearing in Blondie's video for the hit single 'Rapture'.
Basquiat wasn't interested in good reviews, or respectability, which anyone viewing his work could see. These canvases were done by a young man, barely out of his teens, who never lost a teenagers contempt for conformity. It's futile to try and assert conventional art-historial limitations on his work. He refused to be labeled or pigeon-holed.
What little we know about Basquiat can be described as this: An unprecedented painterly sensitivity expressing itself in a young black male, the emplacement of dread and misgivings in a racist society whose work was highly collectible. A crossroads of duplicity.
In the 30 years since Basquiat died of a drug overdoes at the age of 27 in 1988, the prices of his work have steadily climbed, his estate partnering with Sean Jean have gained popularity with Millennials. The mystery surrounding him has only increased reactions to his work very polarizing.