Among living artists, George Condo may be the most embraced by the powers that be - Jerry Saltz (American art critic) 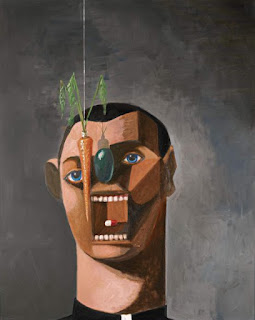 George Condo's work is evocative of Picasso and de Kooning

Using depth, and whimsy. Condo, known for his paintings and prints of fractured and aggressive imagery sometimes merging contemporary techniques of classic paintings from the Masters with a completely different aesthetic. He has described his style as psychological Cubism.
Populated by a cast of characters whose bulging eyes, bulbous cheeks, proliferating limbs and hideous over or under-bites mark them apart as a singular species, Condo's art is profoundly original. The astonishing range of sources which his pictorial vocabulary draws upon is often noted, and yet this continuity across his hugely diverse painting practice bears witness to his achievement in absorbing the revolutionary genius of Picasso, Velazquez, Matisse, Arcimboldo, Pollock, Twombly and countless others making them new; characteristically his own. - Skarstedt
Condo's subjects, reflect the psychosis of artificial realism and run the gamut of priests, clowns, waiters, 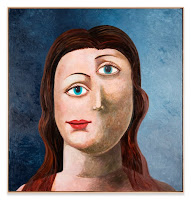 debutantes, all stare unabashedly at the viewer, a melange of cartoon, human forms resonate the profusion of the lurid, somewhat mutated and abstract.
Condo worked briefly for Andy Warhol at his infamous Factory studio as a screenprinter and within a few years, Warhol was buying his work and never remembered Condo had once been his employee. He collaborated with Kanye West in 2010 and produced the art for his album 'My Beautiful Dark Twisted Fantasy, has exhibited across the US, Europe, and Asia, with permanent collections in the Museum of Modern Art, New York, the Witney Museum, New York, the Metropolitan Museum of Art, New York, the Albright-Knox Museum, Buffalo, New York, the Corcoran Gallery of Art, Washington, D.C., among others and public collections. 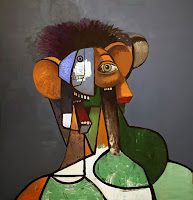