I don't think any musician ever thinks about making a statement. I think everybody goes into music loving it - Hugh Masekela (South African Trumpeteer)

Musician, Hugh Masekela, was known as the father of South African Jazz

Acknowledged mostly as a world-renowned trumpeter, bandleader, and composer, he was also a flugelhornist, singer and defiant activist against apartheid. As a child, he sang and played piano at his grandmother's illegal bar and at 14 was gifted with a trumpet from Father Trevor Huddleston, an equal rights activist in South Africa. Soon after, the Huddleston Jazz Band was formed. His signature Afro-Jazz style began forming during this time. 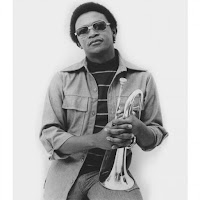 From 1954 Masekela played music that closely reflected his life experience. The agony, conflict, and exploitation South Africa faced during the 1950s and 60s inspired and influenced him to make music and also spread political change. He was an artist who in his music vividly portrayed the struggles and sorrows, as well as the joys and passions of his country. His music protested about apartheid, slavery, government; the hardships individuals were living. Masekela reached a large population that also felt oppressed due to the country's situation. - Wikipedia 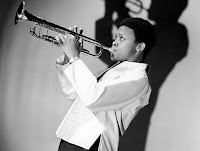 His fierce opposition to apartheid resulted in being exiled from his native South Africa for 30 years returning under the leadership of Nelson Mandela.
He was mentored by Dizzie Gillespie and Louis Armstrong during his time in the states who encouraged him to stay true to his South African inspiration; but his hits in the US, 'Up, Up and Away' (1967) and the number one 'Grazing in the Grass' (1968, which sold 4 million copies) have American pop undertones. He was married for a time to Mama Africa, Miriam Makeba, also a singer, songwriter and fierce apartheid activist.

Google honored him on his birthday last week