Art has no walls. Anybody can be an artist. Art has no rules. There’s no manual - Mr Brainwash (French born street artist)

Mr, Brainwash made his entrance through "Exit..." 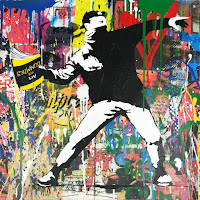 Theirry Guetta let us watch his foray as Mr. Brainwash into the art world via the Banksy documentary, "Exit Through the Gift Shop: A Banksy Film", an award nominated film, following the lives and art of some of the most influential street artists of the time. His name still sparks conversations in and out of the art world as he admits to knowing nothing about art yet became an overnight sensation by simply deciding to be an artist. He chose to forgo the hard work and sacrifice most endure to obtain the same recognition. Is he a fraud or a bonafide artist who deserves recognition of the aesthetic he brings in his work?
Becoming Mr. Brainwash wasn't difficult for Guetta who found 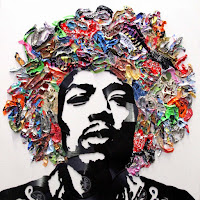 his voice in graffiti, street art combined with images from pop culture. His sense of composition and execution make up for the shortage of inventiveness. He is living proof of his own attitude that art is for everyone and anyone can be an artist, there is no manual or instructions, breaks down the barriers and makes art more approachable. Pablo Picasso said "Good artists copy, great artist steal". Perhaps Guetta in somewhere between the two.
With a sense for entrepreneurship, that replaced the absence of artistic training, he established himself as one of the leading figures on the contemporary urban art scene. He is the master of appropriation and reappropriation, but the lack of originality in his works doesn’t seem to bother collectors much. In the past, his exhibitions sold in a matter of days and since his auction debut in 2010 Mr. Brainwash’s works have been widely present at major auction houses. Some works that fetched more than $50,000 at auctions. 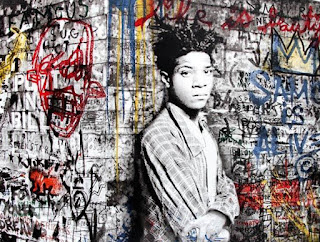 There is some discussion maybe pop culture's most elusive street/activist artist, Banksy is the man behind the man, responsible for all of Mr Brainwash's success, or perhaps they are one and the same, polar opposites, one, the elusive, never photographed out of shadow, the other the antithesis of camera shy.
Kate Moss, one of the most recognizable faces of our time, is an often portrayed inspiration for Mr. Brainwash and there are many of his works that pay tribute to this fashion icon. The portrait of Kate Moss decorated with splashes of gold, red and pink was created in 2010 and auctioned the same year the piece going for $53,900, surpassing the high estimate by 277%. 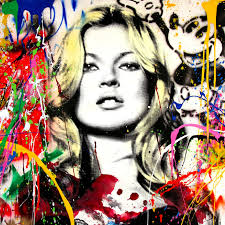 Since the premiere documentary 'Exit through the gift shop: A Banksy Film' released in 2010, there has been much debate over its authenticity. Some have questioned its organic nature and argue it's more mockumentary than factual. Either way, it's an interesting perspective into the world of street art.
Follow my blog with Bloglovin
Art Artists