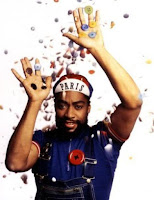 With so much talk about the blackface controversy, its background, and meaning, I was reminded of an up and coming African American fashion designer from the 80's, Patrick Kelly. Kelly's design and aesthetic of sleek silhouette and bright colors approached fashion with humor, fervor, pop culture and Black folklore.
Through his signature jersey dresses, bold, and buttoned, Kelly tried to reclaim racist iconography for black people, the flare and sophistication he summoned with trendsetting collections elevated the styles of the black women he grew up with in the deep South to heights of fashion never seen before. Feminist Gloria Steinem stated, "He unified us with buttons and bows, tassels and fringe."
His experimental forward-thinking one-off designs displayed maturity, his industriousness and determination played a key role in the the achievements of one so young and captured the attention of French ELLE magazine who featured his first collection in 1985 garnering attention and widespread acclaim for his designs. 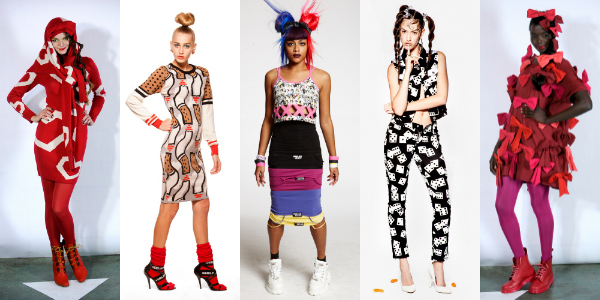 He like, so many Black Americans who found a creative sanctuary in Paris, developed a unique approach to his brand which included a blackface character. 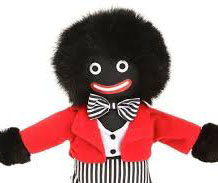 It was Kelly's visual interpretation of the golliwog, a fictional black character that first appeared in an English children's book in 1885, where she was described as "ugly yet friendly" and "a horrid sight, the blackest gnome." The figure was turned into a doll that was popular with kids until the 1970s. But by the time Kelly incorporated it into his haute-couture collection, the golliwog was widely understood as a symbol of racism. - Fast Company 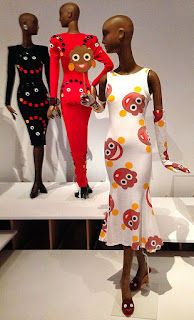 Kelly collected Black memorabilia, with a fondness for items depicting racial stereotypes some may find odd, offensive or demeaning, (which I have experienced when displaying my own collection). He saw a beauty in the imagery and used this material playfully in his designs, featuring cartoonish watermelon wedges, black baby dolls, and bananas, among other likenesses. He sent a model down the runway in a white dress printed with a cartoon image of a black face, with large eyes and smiling red lips, dangly yellow earrings hanging from her ears. The model wore long white gloves with the same pattern, a fan in the shape of the face, and brown heels adorned with white bulging eyes and a red smile.
Kelly's work was important in the way he focused race and heritage in his designs, and public image. No other designer has used his ethnicity and culture so prominently in the way he presented his fashions to the world. Nor has any other designer been so purposeful in exploiting both.
In 1988, he was inducted into the Chambre Syndicale, the first American designer to be voted in. His work was powerful and singular, with the energy to create a new wave in fashion. However brilliant his ascent to fame, his career was incredibly brief. Before his death in 1990 from complication from AIDS, Kelly showed 10 extravagant and whimsical womenswear collections under his own label in Paris.