Who ever walked behind anyone to freedom? If we can't go hand in hand, I don't want to go. - Hazel Scott (American jazz and classical pianist and singer)

Hazel Scott was once the most famous artist in Jazz music 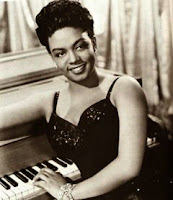 Born a musical prodigy in Trinidad and Tobago, Scott's family migrated to New York when she was four years old, awarded a scholarship at Julliard where she studied classical piano at eight and performing with bands on the radio at sixteen. Scott played with the Count Basie Orchestra at Roseland Dance Hall and dubbed, the "Darling of Cafe Society", a night club she performed regularly as a teenager. She was also an accomplished jazz singer, astounding audiences with her swing renditions of classical masterpieces. Her talent spanned from some of the most elegant clubs of New York to Broadway to Carnegie Hall.
Her career elevated her to such a level that she could successfully challenge the roles and treatment of black actors when Hollywood came calling. During segregated America, women of color were stereotypically viewed as homely and unattractive but Scott, with her natural beauty, glamour and sex appeal changed all that by refusing to succumb to typical parts offered to actors of color at the time, those of housekeepers, nannies, and fallen women by playing herself in several films (including 'Something to Shout About', 'I Dood It', 'The Heat's On', in 1943, 'Broadway Rhythm' in 1944, and 'Rhapsody in Blue' in 1945) in an otherwise all white cast. In 1950 she became the first black person to have a TV show which featured a variety of entertainment paving the way for other artists of color.
Scott was married for a while to Adam Clayton Powell, Jr. a minister and U.S. Congressman and like many African American entertainers of the era, an avid civil rights activist.
She was once escorted from Austin, Texas by Texas Rangers because she refused to perform when she discovered that black and white patrons were seated in separate areas. "Why would anyone come to hear me, a Negro," she told Time Magazine, "and refuse to sit beside someone just like me?" - Wikipedia
Despite her fame, Scott also experienced discrimination, sued and won against the owners of a Washington restaurant when a waitress refused to serve her and a companion because of their skin color. This victory helped challenge racial discrimination and inspiring civil rights organizations to pressure change in the state.
She moved to Paris from 1950 to 1967 when her career saw decline after she testified before the House on Un-American Activities Committee during the McCarthy era. In 1981 she died of cancer at age 61.
Follow my blog with Bloglovin
Actors Film Icons Music