If I lost everything, I'd claw my way back to the top somehow - Freddie Mercury (British singer, songwriter, lead vocalist for Queen, rock band) 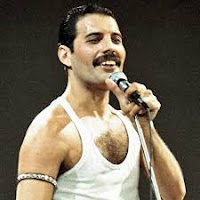 Although the band has powered on without him, 27 years later, he is still considered the preeminent lead singer, his voice unmistakable. Mercury wrote numerous hits with Queen, too many to list. The band’s sound was a mix of hard and glam rock, who's popularity skyrocketed from Europe, across the pond to America, and then the globe. Ever the showman, he would connect and entertain audiences from all walks of life. He strutted around stage, sometimes in costumes, not a rock star, but in Freddie’s own words, “a legend”.
In addition to writing most of Queen’s most famous songs, artistically inclined Mercury, was also an accomplished pianist as well as involved in creating the art on many of the band's album covers. Freddie was one of the most talented and innovative singers of the rock era and with Queen recorded 18 albums and countless singles.
Freddie had four extra teeth which pushed the front ones forward, creating the infamous overbite. Although he was never comfortable with the way it made him look, he wouldn't get this problem fixed, him believing it the cause of his unique sound and possibly destroy his four octave range.

Sporting events wouldn't be the same without 'We are the Champions' and 'We will Rock You!', both written by Freddie.
Bohemian Rhapsody is a foot-stomping celebration of Queen, their music and their extraordinary lead singer Freddie Mercury. Freddie defied stereotypes and shattered convention to become one of the most beloved entertainers on the planet. The film traces the meteoric rise of the band through their iconic songs and revolutionary sound. They reach unparalleled success, but in an unexpected turn Freddie, surrounded by darker influences, shuns Queen in pursuit of his solo career. Having suffered greatly without the collaboration of Queen, Freddie manages to reunite with his bandmates just in time for Live Aid. While bravely facing a recent AIDS diagnosis, Freddie leads the band in one of the greatest performances in the history of rock music. Queen cements a legacy that continues to inspire outsiders, dreamers and music lovers to this day. - 20th Century Fox