I never paint dreams or nightmares. I paint my own reality. Frida Kahlo (Mexican artist) 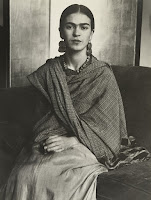 Considered one of Mexico's greatest artists, Frida Kahlo was one of a kind.
Her work, considered surrealist by some but perhaps known as much for her feminism, whose self-portraits and works were inspired by nature and artifacts of Mexico. She suffered from polio as a child and a traffic accident at 18 left her plagued with pain and medical problems, ending a promising career in medicine. During her recovery, she returned to her childhood hobby of art, primarily using herself as a model. Her paintings had a strong autobiographical quality mixing realism with fantasy employing a naive folk-art style. The early works also show influences from European, Renaissance masters as well as avant-garde and Cubism movements.
She stated after the accident and recovery period made her desire "to begin again", painting 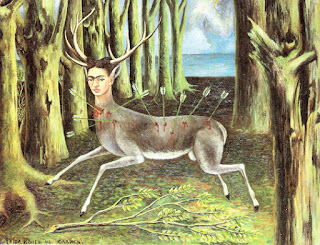 things as she saw them with her eyes and nothing more.
Frida's otherworldly images questioned identity, postcolonialism, gender, class and race in Mexican society.
She enjoyed wearing traditional indigenous Mexican peasant clothing, long and colorful skirts, elaborate headdresses and jewelry. This came to represent an authentic Mexican cultural heritage in post-revolutionary Mexico. The style now iconically identified with her. 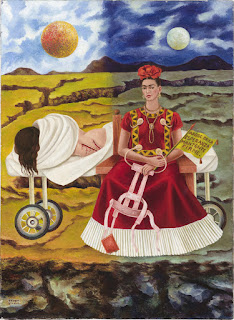 .
She was married to Diego Rivera, noted muralist, and political revolutionary who was more than 20 years her senior. Their marriage was under constant media attention in Mexico for years referring to the duo in articles as "Diego and Frida". She was an artist who blazed trails and broke down barriers. In her short 47 years, she achieved celebrity status exhibiting across multiple continents.
A few years ago, I was fortunate enough to see some of her works in person, the color and composition captivating. 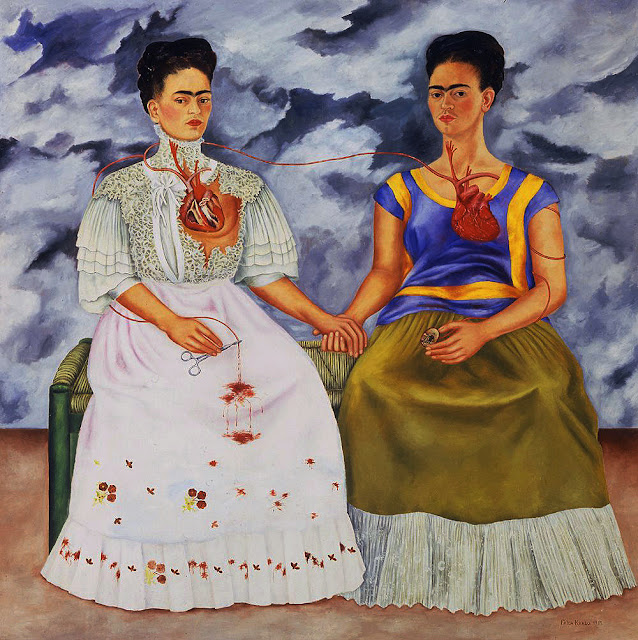 Her likeness has seen a spike in popularity, depicted in everything from dolls to resturant themes and if you haven't seen the movie, Frida, produced by and starring Salma Hayek, as well as directed by the amazing Julie Taymor, do so immediately. It focuses mainly on she and Diego's relationship but visually it's brilliant.