I love a female villian, and Medusa is probably the best known "Bad Girl" 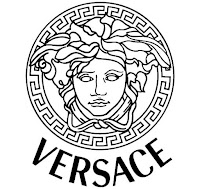 The likeness of Medusa has been transformed in popular culture into the representation of strength, fearlessness and courage including the logo of designer Gianni Versace.
Originating from Greek mythology, it is debated that she was said to have been beautiful beyond description who although took a vow of lifelong celibacy, fell in love with Poseidon (the God of the sea), and married him. Enraged, Athena (Goddess of Wisdom and War), to punish Medusa, transformed her beautiful hair into serpents and her face so terrible the mere sight of her would turn onlookers into stone.

She has been immortalized in books, movies, and several works of art by some of the greatest artists in history, Michele Angelo Merigi Caravaggio, Paul Reubens, and Salvador Dali just to name a few. 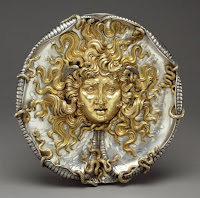 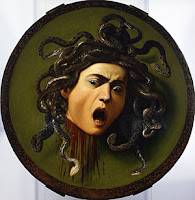 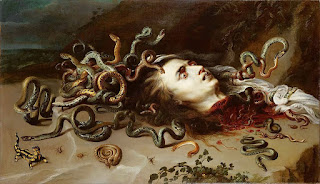 One of the most recognizable images of Greek/Roman mythology, Medusa's portrayal has gone from a gorgon, grotesque part human part animal creature with wings and tusks then to an alluring seductress, her snakes now wild curls,and finally again with serpent hair and stare turning viewers to stone representing a figure of fatal beauty or a detested woman in power. 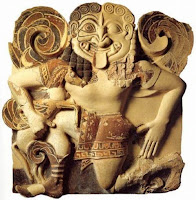 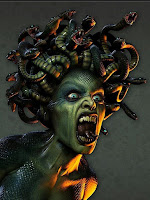 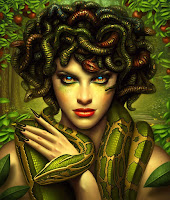 In the 20th century, feminists reassessed Medusa's appearances in modern culture. The name "Medusa" itself is often used in ways not directly connected to the mythological figure but to suggest the gorgon's abilities or to connote malevolence; despite her origins as a beauty, the name in common usage came to mean monster. The book Female Rage: Unlocking Its Secrets, Claiming Its Power by Mary Valentis and Anne Devane notes that "When we asked women what female rage looks like to them, it was always Medusa, the snaky-haired monster of myth, who came to mind ... In one interview after another we were told that Medusa is 'the most horrific woman in the world' ... though none of the women we interviewed could remember the details of the myth." - Wikipedia
Follow my blog with Bloglovin
Art Education Icons Literature Misc Mythology Visual