This post started with the intention of being about musical theater but soon evolved into an homage to Bob Fosse, my favorite choreographer. He started his career as an actor who also wrote and directed for film and stage but he is most known for his signature and unmistakeable performance style which still influences dancers and choreographers today. Here are my favorite movies and stage productions I most associate with this icon. 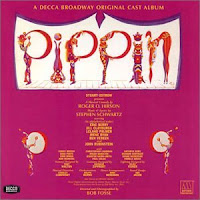 Pippin:
The ensemble cast tells the story of Pippin, a young prince who longs to find passion and adventure in his life. To prove his loyalty to his distracted father, King Charles, Pippin goes to war. But when the Leading Player convinces the prince to fight tyranny, Pippin kills Charles and takes over the throne. - Google

Sweet Charity:
The full title is Sweet Charity: The Adventures of a Girl Who Wanted to Be Loved stars Charity Hope Valentine (Shirley MacLaine) and includes camo appearances by Sammy Davis, Jr., Ricardo Montalban, Chita Rivera, Paula Kelly and many others. It was originally based on Federico Fellini's film Le Notti di Cabiria (Nights of Cabiria). However, where Fellini's concerns the romantic ups-and-downs of an ever hopeful prostitute, the musical makes the central charater a dancer-for-hire at a Times Square dance-hall. - Wikipedia edited

Nightclub sensation Velma (Catherine Zeta-Jones) murders her philandering husband, and Chicago's slickest lawyer, Billy Flynn (Richard Gere), is set to defend her. But when Roxie (Renée Zellweger) also winds up in prison, Billy takes on her case as well -- turning her into a media circus of headlines. Neither woman will be outdone in their fight against each other and the public for fame and celebrity. - Google

Cabaret (also favorite Liza Minelli film):
In Berlin in 1931, American cabaret singer Sally Bowles (Liza Minelli) meets British academic Brian Roberts (Micheal York), who is finishing his university studies. Despite Brian's confusion over his sexuality, the pair become lovers, but the arrival of the wealthy and decadent playboy Maximilian von Heune (Helmut Griem) complicates matters for them both. This love triangle plays out against the rise of the Nazi party and the collapse of the Weimar Republic. - Google edited

All that Jazz:
Although this is closer to the bottom of my favorite Fosse films, it's still worth a mention because it's is a semi-autobiographical tale written and directed by him.
When he is not planning for his upcoming stage musical or working on his Hollywood film, choreographer/director Joe Gideon (Roy Scheider) is popping pills and sleeping with a seemingly endless line of women. The physical and mental stress begins to take a toll on the ragged perfectionist. Soon, he must decide whether or not his non-stop work schedule and hedonistic lifestyle are worth risking his life. - Google edited
Follow my blog with Bloglovin
Dance Film It's Art too Movies Stage