What are words for? - lyrics: Missing Persons (American band)

Life without books, is no life at all

I'm a self-certified (or certifiable) bookworm. As a child I read constantly and my friends thought I was crazy. To them, reading for pleasure, was completely unheard of. A few years ago I got my first tablet, started with eBooks and now my virtual library shelves are creaking from the weight of so many books. Bookbub is a fantastic source for free and greatly reduced priced ebooks. Although I still love having and collecting real books, I now have over 3,000 virtual ones, which will take a lifetime to read them all, mostly through kobo reader, an app that tracks info like reading time per session, how many pages per hour, and accumulate awards as you progress. I also enjoy using the Goodreads book challenge with friends, and read or listened to over 20 books last year.


Recently, I've been listening to audio books in my car instead of the radio and currently on book ten of the Charley Davidson Graves series by Darynda Jones. 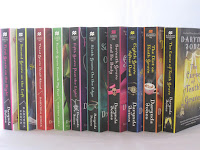 The narrator, Lorelei King has become a sort of hero for me, I love the way she makes the characters come to life and I find myself laughing out loud when she's funny and fighting back tears when she's emotional. What a cool job.

I like reading book series because I get completely invested in the characters that one book only leaves me with a book hangover, unable to start another because I'm still so caught up in the one just finished, I find myself wanting to know more about my new friends. I have to be careful tho, too much and I start to get sick of them. I've promised myself after book eleven I'm moving on, I promise.